Cryptocurrency is right step in the future. Since 2009, when were created and presented to Internet community first digital coins: Bitcoin. Financial analysts began to closely monitor cryptocurrencies. Today cryptocoins are extracted and bought; it is exchanged for real money, in other words, millions of people trust cryptomoney. And this is main condition for development of any money.

Many brokers have already connected cryptocurrency as an object of trade on their sites and IQ Option is no exception. Now 15 most popular and promising tokens types are available on trading platform.

Types of cryptocurrency that are available in IQ Option

Bitcoin, BTC is first and successful cryptocurrency, which was created in 2009. This constant leader of digital money. Behind it is Blockchain technology. Main characteristic is the decentralized and limited tokens release. The limit value is 21000000 BTC. Bitcoin is extracted using SHA-256 script.

Ethereum, ETH is an improved BTC analogue. It was developed using Blockchain technology in 2015. It is designed to create any (smart contracts). ETH acts on Proof-of-Work technology to protect the network and works in accordance with the Dagger-Hashimoto algorithm. These coins provide a platform for decentralized applications that work on smart contracts basis. The release of this cryptcurrency is limited to 72000000 ETH.

Dash, DASH is a whole cryptosystem with the DarkSend transaction mode, which completely blocks the tracking function. This mode can be disabled. DASH currency is also called Darkcoin, DRK and Xcoin, XCO. This is project from Blockchain too. The coins generation is limited to 22 million DASH. Blocks are decrypted in 2,5 minutes. Each block has 50 coins. The launch of cryptocurrency was 2014.

Ripple, XRP is a project of Ripple. Cryptocurrency XRP is a system of money transfers and real-time payments. It is based on a distributed protocol, and has open source code. Ripple tokens launched in 2012. The main characteristic of XRP is the consensus register ledger.

Zcash, ZEC is a project that was proposed by private company Zerocoin Electric Coin Company (ZECC) in 2016. The source code of ZEC cryptocurrency technology is open. Zcash guarantees confidentiality, but their transactions have selective transparency, that is, they are published in clear form, but the data about sender, amount and recipient are closed.

Bitcoin Cash, BCH is cryptocurrency, which appeared after the hard fork formation a BTC. The waiting time for Bitcoin transfers was long enough, which caused the indignation and separation of cryptocurrency in August 2017. Bitcoin Cash is completely similar to its counterpart: it has a production limit of 21,000,000, duplicates the production norms. The algorithm is SHA-256.

Bitcoin Gold, BTG is next Bitcoin offshoot that took place during the unblocking of block No. 491407 in October 2017. BTG is working with a new algorithm: Equihash, which returns coin mining process to the original concept: when even ordinary users could get Bitcoin on their video cards. In other words, the BTG branch returned the coins extraction process again to a decentralized form.

Electro Optical Systems Coin, EOS is environment, similar to Ethereum: it is designed to form (smart contracts) of any complexity. EOS feature is an improved mechanism for use, which comfortable of large corporations. This is an updated virtual machine, Ethereum, which works no longer as a large supercomputer, but actions as an environment around the OS where programmers can host their applications.

Ethereum Classic, ETC is cryptocurrency, which appeared as a result of separation from the original Ethereum. Hard fork DAO occurred in 2016. This means that almost a year after the ETH launch. Therefore, Ethereum Classic is called scandalous crypto currency. In ETC, there is a mechanism for price formation of transactions, which prevents spam in network and distributes digital resources according to requests.

NEO is a non-commercial Blockchain development, which promotes a new and promising idea of developing a (smart economy). In 2014, cryptocurrency was issued under the name Antshares, and in July 2017 it experienced a rebranding and became known as NEO.

OmiseGO is technology, which is based on the Ethereum platform, developed in 2013. It serves as a peer-to-peer exchange of market assets in real time. OmiseGO is used by many payment systems to coordinate payments between them. This system allows you to combine the exchange of various money and payment services in real time. Buyer can pay the bill in a currency convenient for him, and recipient will receive funds in a format convenient for him as traditional currencies, as well as cryptocurrencies.

Quantum, Qtum is a hybrid branch of BTC and virtual platform Ethereum. Quantum technology received the best quality from two giants. It provides great functionality and improved security, unlike the traditional BTC and the possibility of developing decentralized (smart contracts). Launched in fall of 2017.

TRON, TRX is a distributed platform for storing content. The protocol, which is based on a Blockchain. It designed for entertainment systems around the world. Thank to decentralized storage technology of block-type circuit. TRX is a cryptocurrency, operating on its own TRON protocol, thanks to which users can place and store data.

Stellar, XLM is a branch from the Ripple cryptocurrency as a distributed platform that supports any currency in 2014. Stellar allows users to exchange and trade any electronic money. It works on its own protocol (open-source).

A common understanding of the cryptocurrency available on IQ Option will allow us to begin a technical analysis of the behaviour of its price on site. Full descriptions and other useful information of each coin are available on official websites of development companies and thematic information resources. Detailed information about each cryptocoins will help to conduct a fundamental analysis for improve accuracy of forecasts and reduce level of risk in trade.

The financial services provided by this website carry a high level of risk and can result in the loss of all your funds. You should never invest money that you cannot afford to lose. 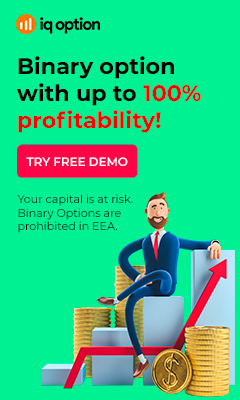